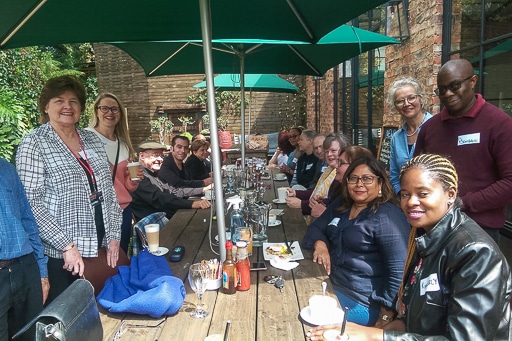 It was a momentous occasion on Friday 8 April when Gauteng North and -South Regions held a brunch rendezvous. Not only was it the first joint event for members in the two neighbouring regions, but it was also the first live event for over two years.
Read more

There might have been a chilly autumn wind blowing, but the atmosphere around the table was warm and welcoming. It was clear that members were keen to blow the cobwebs away after the long hiatus. There was an excellent turnout, with 20 members attending, all keen to make new acquaintances and re-establish old ones.

The morning kicked off with a round-table discussion on the latest Rates Survey, released that same day, with members sharing their experiences of keeping the freelancing fires burning during difficult Covid times. Once that was out of the way and everyone had got to know their fellow members a little better, it was time for eating and chatting – and plenty of both took place!

So popular was the event that there have been a number of requests both from those who were able to be there and those who had to miss it, to hold another get-together soon. Watch this space, because that’s exactly what the two regions plan to do!